Although “mulatto” is not the “double” on which this article focuses, the perils of navigating a biracial identity that remains disrespected by, unsupported by, unacknowledged by, and unacceptable to the mainstream society surrounding the individual are so accurately communicated that I just had to post this.  Crux of the issue: “feeling of being an incomplete person has sometimes led to deep depression.”  I think that the only way around this is to eradicate the illusion of separation by infusing into our collective consciousness the truth of oneness.  No halves.  No sides.  No divide.

Also touched upon here is the aspect of chaos that the Americans have injected into the Okinawan landscape that is worth analyzing.

In Japan but surrounded by U.S. influence, Okinawa struggles with split identity

CHATAN, JAPAN — These days, when Melissa Tomlinson describes her fraught relationship with the United States, she speaks in English, the language she once rejected.

She grew up here on the island of Okinawa. Her mother was Japanese, and her father was an American who served in the U.S. Army, came to Okinawa, fell in love, fell out of love, then fell out of touch.

“I had plans to track him down, find him and punch him in the face,” said Tomlinson, 22. “I just wanted to figure out my identity.”

Tomlinson’s family tensions illustrate the complex cultural clashes that dominate the politics of Okinawa and, lately, relations between what have been the world’s two largest economies as they cope with a rising China and a belligerent North Korea.

For the more than 60 years since the end of World War II, native Okinawans and U.S. troops stationed on nearby bases have developed deep, passionate and generation-spanning ties that complicate political and diplomatic debates about the future of the U.S. military here.

Those passions have recently claimed the head of one Japanese prime minister, Yukio Hatoyama, who had called for the Americans to be booted off Okinawa, and caused his successor to sharply tone down his party’s assertive stance toward the United States.

A vocal majority of Okinawans still demand closing the Futenma Marine Corps Air Station. American officials, citing proximity to North Korea, China and Southeast Asia, insist it remain in Okinawa. Japan, in its attempt to mediate, has only frustrated both sides.

The current resolution, which Prime Minister Naoto Kan says his government will honor, calls for Futenma’s eventual relocation to a less populated region in the north of the island. Kan apologized last week for the “heavy burden” facing Okinawans.

Many locals on this Pacific island hosting more than half of the 47,000 U.S. troops stationed in Japan complain most commonly about the noise, congestion and crime. But emotional blood ties and cultural confusion amplify those concerns. Tormented by her identity, Tomlinson said she has tried to kill herself “a couple times” in the past two years.

Tomlinson said she struggles to convince herself — and others — that she is truly Japanese and Okinawan. She called her identity “ambiguous” and said her feeling of being an incomplete person has sometimes led to deep depression.

A generation of biracial Okinawans know about intercultural relationships, writ small. They know about romance and separations, child-support battles and reunions. They know that Japanese children refer to their biracial peers as “halfs,” and nowadays, they know of the local American-Asian school, for biracial children, where those kids are taught to call themselves “doubles.”

“Unfortunately, some kids never live with their father, but they cannot lose their DNA,” she said. “Their body shows that they are not 100 percent Japanese.”

Denny Tamaki, 50, the local representative to the Japanese parliament, knows only that his father, an American serviceman whom he has never met, was named William.

When William returned to the States and Tamaki’s mother decided not to follow, she burned his photos and letters. When they moved to a new home, she didn’t give him their new address. When Tamaki turned 10, his mother took him to a government office, where they officially changed his first name to Yasuhiro.

Tamaki knows little English and wants Futenma moved off Okinawa because “it feels like we’re living under occupation.” But he has a passion for American music — Aerosmith, for instance — and American television shows.

A decade ago he tried to track down his father, with no luck. When his kids ask about their grandfather, he tells them that it would take the detectives from “CSI: Miami” to find him.

Search for a father

Tomlinson’s mother and father were married on Okinawa, and then moved together to Georgia after his tour on the island ended in 1975. Tomlinson was born in Hinesville, Ga., while her father was stationed at Fort Stewart.

Tomlinson’s parents separated when she was 3; she returned to Okinawa in 1990 with her mother. Her father retained custody of their two older children, who stayed in the United States with him.

Growing up, Tomlinson said, she remembered nothing about the separation, and never spoke to her father or siblings. “I’ve had to live with some tough decisions,” said Melissa’s father, who requested that his name not be used.

Tomlinson said her conflicted feelings were often fueled by her mother, who told her she looked “like an American” and tried to hide her from her co-workers. She said they fought frequently, and she told her mother: “Why did you have me? I want to be a Japanese, but I don’t get to choose.”

During high school, she said, a teacher encouraged her to learn English because she would need it if one day she wanted to track down her father. “Maybe you can hear the truth,” the teacher told her. “You should know both sides.”

At the University of the Ryukyus, Tomlinson tried to find English-speaking friends. She watched American television without the subtitles. Still, she confided to friends that she felt depressed.

From her mother, Tomlinson had heard only nasty tales about her father, who was once stationed at the Army’s Torii base. After her junior year in college, in spring 2009, she decided to try to find him and left school for a time.

In March, her U.S. military ID card, a privilege from a relationship she never had, was expiring. The Army passed along her father’s address. She e-mailed him, asking for him to sign the required forms for a new ID.

Weeks later, she heard back from the father who had not seen her since she was 3.

“Hi Melissa, Hearing from you, to say the least, came as quite a shock,” he wrote. “I was not aware that you could speak English let alone read or write it. The last time we had contact, and I am sure you do not remember it, you could only speak Japanese. Trying to bridge the gap with words after all this time would be futile. In life sometimes we have to make decisions that we don’t know if they are right or not, but we have to live with them.”

Tomlinson read and reread the e-mail. She discussed it with friends, and together they parsed the words. Their relationship continued, e-mail by e-mail, and she learned that he liked fishing, and that he missed Okinawa, and that he says he has thought about her every day.

For all these years, he wrote, he avoided contact because he didn’t want her to be torn between parents.

“It would have made your life miserable,” he wrote. 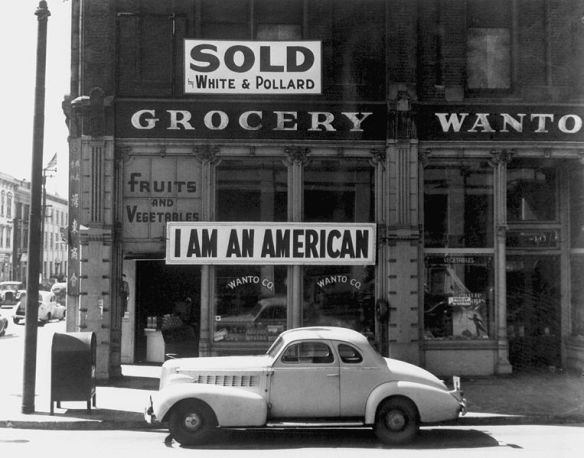 San Francisco, Calif., Mar. 1942.
A large sign reading “I am an American” placed in the window of a store, at 13th and Franklin streets, on December 8, the day after Pearl Harbor. The store was closed following orders to persons of Japanese descent to evacuate from certain West Coast areas. The owner, a University of California graduate, will be housed with hundreds of evacuees in War Relocation Authority centers for the duration of the war. Photo by Dorothea Lange.

On February 19, 1942, President Franklin D. Roosevelt signed Executive Order 9066 relocating 120,000 Japanese Americans from the West Coast into internment camps for the duration of the war. The personal rights, liberties, and freedoms of Japanese Americans were taken away from them by their own country. Since World War II, a Japanese American struggle continues to obtain reparation from the U.S. Government.

August 10, 1988 H.R. 442 is signed into law by President Ronald Reagan. It provides for individual payments of $20,000 to each surviving internee and a $1.25 billion education fund among other provisions.

October 9, 1990 The first nine redress payments are made at a Washington D.C. One hundred seven year-old Rev. Mamoru Eto of Los Angeles is the first to receive his check.

The Civil Liberties Act was an official apology made to Japanese Americans in 1988 by Congress.

I’ve never been one to make much of a case for reparations for African American slavery, but I can’t help feeling like if “they” got it “we” should too.  It seems to me that this is further evidence of the dehumanization of black people.  Black people don’t deserve reparations?  They should be grateful to find themselves in America today instead of in the jungle?  They were created to work and don’t need much in return?  That’s what the implications of reparations for some, but not for those treated the worst while doing the most to make this country what it is- what it should be, but isn’t right now- today.  It’s kind of like the one-drop rule in a way.  Only applies to black people.  Asians, Hispanics, Indians can mix with whites for a couple of generations and their legacy is then white.  There is no one-drop to follow them around and accuse them of denying something or being ashamed or self-hating.  Their blood is not tainted.  Of course neither is mine, yet these implications remain.