Text of the sign: “The White Top Folk Festival was held annually from 1931 to 1939 (except 1937) on Whitetop Mountain — the second highest peak in Virginia. Annabel Morris Buchanan, John Powell, and John A. Blakemore organized the event that featured banjo players, fiddlers, string bands, and ballad singers, as well as storytelling, clog dancing, morris and sword dancing, and theatrical presentations. Thousands of people attended the festival each year, including nationally known academic folklorists, art critics, composers, and in 1933, First Lady Eleanor Roosevelt. The festival was cancelled in 1940 because of heavy rains and floods and never returned.

A First Lady in a False Kingdom: A Curious

From 1932 to 1939, the Whitetop Folk Festival attracted people from far and wide to the small mountain community. In 1933, even First Lady Eleanor Roosevelt stopped by to celebrate.

It was August 12, and the tenure of America’s longest-running first lady was in its infancy. Franklin Roosevelt had been in office just over five months. The FBI was still called the Bureau of Investigation, and its director, J. Edgar Hoover, hadn’t started compiling what would become his largest secret file — the 3,271 pages on Eleanor Roosevelt’s activities, many of them anti-segregation and, thus, “subversive.” The Ku Klux Klan didn’t know Eleanor Roosevelt well enough yet to have a price on her head. Another six years would pass before her infamous resignation from the Daughters of the American Revolution (DAR) over that organization’s refusal to allow African-American contralto Marian Anderson to perform in Constitution Hall.

…One of the festival’s organizers, John Powell, proudly asserted that “the great proof of the importance and the significance of the great musical heritage of our people is in the fact that Mrs. Roosevelt should come.”

Like many a memorable character, John Powell, who was also a founder of the Anglo- Saxon Clubs of America, is both compelling and repelling. A classical composer and pianist from Richmond, Virginia, Powell studied in Vienna with Theodor Leschetizky, in Prague with Karl Navrátil. He made his debut in Berlin in 1907, when he was twenty-five years old; the performance was hailed by critics as one of the most successful the city had ever known.

In the first part of his career, Powell incorporated all forms of American music — notably, African-American music — into compositions like Sonata Virginianesque and Rhapsodie Nègre. But by the 1930s, when he was selecting and shaping the White Top Folk Festival musicians, he was committed to promoting what he considered “Anglo-Saxon” music: a pure, white music from a pure, white region of America, whose music was dangerously at risk of becoming defined by a black American baby called Jazz.

By excluding black musicians, probably of some Anglo heritage themselves, Powell and other festival organizers brought to the mountaintop the pernicious bias that would become Powell’s legacy.

In 1924, Powell was instrumental in a court case that prevented the marriage of Dorothy Johns and James Connor by proving that one of Johns’s ancestors was black, thus she could not legally marry Connor, who was white. Some thirty-four years later, Powell was also instrumental — by virtue of his efforts in the 1920s — in making sure that interracial newly-weds Mildred and Richard Loving didn’t get a full night’s sleep. A few weeks after they were married, the Lovings were awakened around two a.m. by flashing police lights and escorted from their bed so they could be booked into the Caroline County, Virginia, jail. Each was charged with a felony.

The Dorothy Johns case was the first test of Virginia’s Racial Integrity Act, the Lovings’ the last. The “one-drop” law made interracial marriage a felony in Virginia and was especially targeted at whites marrying blacks, blacks being defined, of course, as anyone with “one drop” of black blood. Powell worked with other racial eugenicists to get the law passed in 1924, and was the self-proclaimed originator of it. By 1967, when the U.S. Supreme Court overturned the Racial Integrity Act in Loving v. Virginia, there were similar laws in fifteen other states as far north as Delaware, and as far west as Oklahoma.

For Eleanor Roosevelt, this 1933 trip to Southwest Virginia was a sentimental journey. Her father, Elliott, lived out the Panic of 1893 — the Great Depression’s predecessor — in the Southwestern Virginia town of Abingdon, close to the Tennessee and North Carolina borders.

At the festival, Eleanor warmly addressed the crowd of some ten thousand attendees: “To the people who live here I want to say a special word of gratitude. They have given me the feeling that they remember affectionately my father, whom I adore.”  And then she ended her speech, “For the rest of the day I hope to be just a spectator.”

Hundreds of performers took the stage for the festival that year. Among the prizewinners was Jack Reedy from Marion, Virginia. He won first prize in banjo; tied for first in clog dancing; and performing with the Blevins Brothers in the band competition, tied for first. 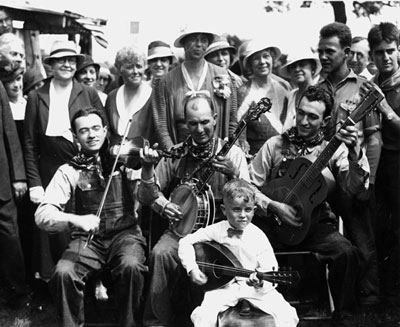 Mrs. Roosevelt may very well have heard some of the same songs her father did. But didn’t she, or any of those reporters who’d read about the “quartette of negroes” singing to him in the 1890s, think it curious that in the 1930s, not a one of the singers, instrumentalists, dancers, or storytellers at this folk-music festival with a five-state view was black? Did they not find the complexion of this kingdom to be unusually fair?  I’d like to think the White Top Mountain Folk Music Festival was the fool-me-once in Eleanor’s evolution as a Civil Rights activist.  Eleanor never publicly criticized the White Top Mountain Folk Music Festival organizers for their exclusion of black performers. But her reaction to some of the people who did perform hints at the cost of Powell’s agenda on the music he was trying to elevate. In her “Passing Thoughts of Mrs. Franklin D. Roosevelt” column in the Women’s Democratic News, Eleanor wrote of the women ballad singers she saw and heard on White Top: “[They were] fine featured … showing in their carriage and expression that there is something in inheritance.” As for the music, “Their voices were not remarkable but the whole thing was of great interest to those who believe that there is value in preserving the folk lore which has come out of the early customs and experiences of the people of the country.”

For whatever Powell might have thought of Eleanor Roosevelt in 1933, it’s quite certain that his opinion would’ve changed drastically by the 1950s, when racists flat-out hated her, some of them wondering why on earth a white person would talk so much about civil rights, others coming to the conclusion that Mrs. Roosevelt must have some black ancestry. Eleanor was downright snide about the whole eugenics thing. In her “My Day” newspaper column, she wrote about receiving an “amusing postcard” from someone in Mobile, Alabama, who wrote: “Dear Mrs. Roosevelt:
You have not answered my questions, the amount of Negro blood you have in your veins, if any.”

To which she responded: “I am afraid none of us know how much or what kind of blood we have in our veins, since chemically it is all the same. And most of us cannot trace our ancestry more than a few generations.” She went on, “As far as I know, I have no Negro blood, but, of course, I do have some Southern blood in my veins, for my Grandmother Roosevelt came from Georgia.”

As for John Powell, he was too “refined” to wear a white sheet. His cloak was musical brilliance, and that brilliance was about as flooded out as the last-planned White Top Mountain Folk Music Festival. (The 1940 festival was rained out, and organizers never brought it back.)

But for all the record-industry packaging that would corral white into “hillbilly” and black into “blues,” making country music today seem the province of white folk, when it comes down to it, American country music got its start as a Virginia-born, biracial baby. Biracial unless, of course, you were to follow Powell’s one-drop definition — in which case it’s black music, just like Powell’s own early compositions, just like every song played on White Top Mountain with that African instrument, the banjo.