…As a black father and adopted white daughter, Mark Riding and Katie O’Dea-Smith are a sight at best surprising, and at worst so perplexing that people feel compelled to respond. Like the time at a Pocono Mountains flea market when Riding scolded Katie, attracting so many sharp glares that he and his wife, Terri, 37, and also African-American, thought “we might be lynched.” And the time when well-intentioned shoppers followed Mark and Katie out of the mall to make sure she wasn’t being kidnapped. Or when would-be heroes come up to Katie in the cereal aisle and ask, “Are you OK?”—even though Terri is standing right there.

…the Ridings’ experience runs counter to these popular notions of harmony. And adoption between races is particularly fraught. So-called transracial adoptions have surged since 1994, when the Multiethnic Placement Act reversed decades of outright racial matching by banning discrimination against adoptive families on the basis of race. But the growth has been all one-sided. The number of white families adopting outside their race is growing and is now in the thousands, while cases like Katie’s—of a black family adopting a nonblack child—remain frozen at near zero.

Decades after the racial integration of offices, buses and water fountains, persistent double standards mean that African-American parents are still largely viewed with unease as caretakers of any children other than their own—or those they are paid to look after. As Yale historian Matthew Frye Jacobson has asked: “Why is it that in the United States, a white woman can have black children but a black woman cannot have white children?”

…”Let me just put it out there,” says Mark, a 38-year-old private-school admissions director with an appealing blend of megaphone voice and fearless opinion, especially when it comes to his family. “I’ve never felt more self-consciously black than while holding our little white girl’s hand in public.” He used to write off the negative attention as innocent curiosity. But after a half-decade of rude comments and revealing faux pas—like the time his school’s guidance counselor called Katie a “foster child” in her presence—he now fights the ignorance with a question of his own: why didn’t a white family step up to take Katie? 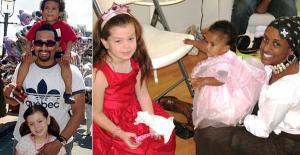