More on the Rhinelander Trial.  I’d like to make a movie about this.

The New Rochelle, New York annulment trial of Leonard “Kip” Rhinelander and his wife, Alice Jones Rhinelander, was a much-publicized issue in the 1920s which highlighted white America’s definitions of race, class, and marriage.

Alice Jones was the daughter of working-class English immigrants.  Her mother was known to be white, while her father’s ancestry was “mixed.”   Leonard “Kip” Rhinelander was descended from a wealthy, white New York family.

Rhinelander and Jones met in 1921, fell in love, and married in 1924.  Because of the Rhinelander family prestige, the union soon became public.  In the social atmosphere of the 1920s, it was scandalous that Rhinelander would marry a woman of lower socioeconomic class, or who possessed any “non-white” blood.  Rhinelander’s father pushed the annulment lawsuit brought by his son only weeks after the wedding, in which Rhinelander, Jr. charged Mrs. Rhinelander with deceiving him as to her race.  The prosecution argued that if Leonard had known she was “not white,” he would not have married Alice.  A leading issue in the trial thus became what Alice Rhinelander’s true race was, bringing into sharp focus the arbitrary nature of white America’s obsession with racial classification during that period.

Attorneys on each side attempted to answer this question using Alice Jones Rhinelander’s social network, her father’s ancestry, and even her language as evidence of her racial status.  The Rhinelander attorneys attempted to paint Leonard as a “dupe” victimized by a “vamp,” playing on sexualized stereotypes of African American women, while defense counsel resorted to desperate means to prove that Rhinelander must have known his bride was not “white” when they induced a stricken Alice to disrobe before the jury.

During the trial, the court required Alice to disrobe on the witness stand for examination of her skin. The court wanted the jury to inspect the color of her nipples.

The Rhinelander Trial held the public in its grip for the better part of 1925, with both black and white press weighing in with varying opinions.  Ultimately, on December 6, 1925, the jury ruled in Mrs. Rhinelander’s favor.  Playing on the notion that race can be visually established, the defense attorney successfully “showed” Mrs. Rhinelander to be “colored,”  argued that she could not have deceived her husband, and therefore his claims for annulment were invalid.

LATE IN 1929, Alice agreed to a divorce in exchange for a small monthly pension, and with the stroke of a pen a Nevada judge erased Kip Rhinelander’s social error. According to the terms of the settlement, Kip Jr. paid Jones a lump sum of $32,500 and $3,600 per year for life if she would disown their family name. Ironically, Jones would outlive her ex-husband by 50 years, passing away in 1989. On her gravestone read the name Alice J. Rhinelander. 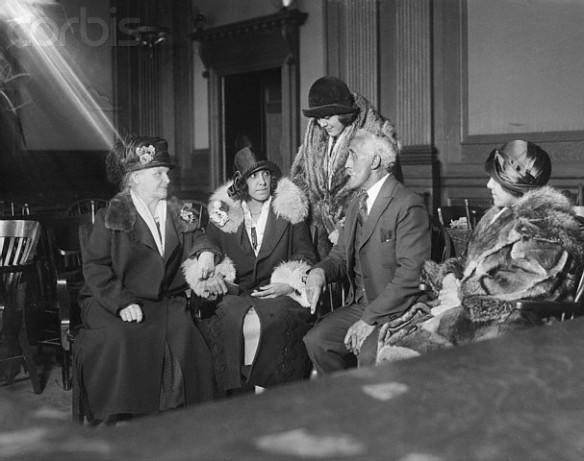