“dubuque, de moines, davenport, marshalltown, mason city, keokuk, ames, clearlake…”  if you didn’t do the music man in high school that might not mean anything to you, but this op-ed is worth reading anyway. in my opinion.

By STEVEN W. THRASHER
Published: April 8, 2009
IF it weren’t for Iowa, my family may never have existed, and this gay, biracial New Yorker might never have been born.

In 1958, when my mother, who was white, and father, who was black, wanted to get married in Nebraska, it was illegal for them to wed. So they decided to go next door to Iowa, a state that was progressive enough to allow interracial marriage. My mom’s brother tried to have the Nebraska state police bar her from leaving the state so she couldn’t marry my dad, which was only the latest legal indignity she had endured. She had been arrested on my parents’ first date, accused of prostitution. (The conventional thought of the time being: Why else would a white woman be seen with a black man?)

On their wedding day, somehow, my parents made it out of Nebraska without getting arrested again, and were wed in Council Bluffs, Iowa, on March 1, 1958. This was five years before Nebraska would strike down its laws against interracial marriage, and almost a decade before the Supreme Court would outlaw miscegenation laws throughout the country in Loving v. Virginia.

When the good state of Iowa conferred the dignity of civic recognition on my parents’ relationship — a relationship some members of their own families thought was deviant and immoral, that the civil authorities of Nebraska had tried to destroy, and that even some of my mom’s college-educated friends believed would produce children striped like zebras — our family began. And by the time my father died, their interracial marriage was seen just as a marriage, and an admirable 45-year one at that.

That I almost cried last week upon reading that the Iowa Supreme Court overturned the state law banning same-sex marriage will therefore come as no surprise. I’m still struck by one thought: over the years, I’ve met so many gay émigrés who felt it was unsafe to be gay in so-called flyover country and fled for the East and West coasts. But as a gay man, I can’t marry in “liberal” New York, where I’m a resident, or in “liberal” California, where I was born, and very soon I will have that right in “conservative” Iowa.

Of course, the desire to define relational rights and responsibilities with a partner, to have access to the protection that this kind of commitment affords, is rather conservative. But it’s a conservative dream that should be offered to all Americans. Though it takes great courage for gays to marry in a handful of states now, one hopes that someday, throughout the nation, gay marriages, like my parents’ union, will just be seen as marriages.

It’s safe to say that neither the dramas of our family, nor its triumphs, could have been possible without the simultaneously radical and conservative occasion of my parents’ civil marriage in Iowa. And so when the time comes, I hope to be married at the City Hall in Council Bluffs, in the state that not only supports my civil rights now, but which supported my parents’ so many years ago.

Steven W. Thrasher is a writer and media producer. 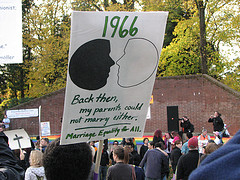