I was gonna let this whole Columbus Day thing slide, but listening to the holiday hype on news radio this morning irritated me into this.  Apparently my willingness to ignore it was based on my assumption that everyone else would do the same.  In all fairness, I do not know one person who celebrates or observes Columbus Day.  But hearing reports from the parade in Manhattan and seeing a few posts in various places with glowing reverence for the explorer was jarring.  It feels like irrefutable truth to me that people were living on this continent before Columbus arrived, so this whole notion of discovery is beyond absurd- it is simply incredible.  There is no credibility in that hypothesis. Zero. And yet, it’s the story that gets told as fact.  This is very bold, seeing as the lies are exposed in the most basic telling of the story.

What I find when I investigate my agitated response to a silly parade is that it speaks to a larger issue.  That even when the truth is right before our eyes, it’s easy to be lulled by the institutional illusion that has been handed down as historical fact.  It’s easy to just accept what we’re told even when it contradicts what we know and/or feel to be true.  Maybe that’s the price of the American Dream.  You have to adhere and become blind to so much bullshit while chasing it, that once you get there (if you get there) you’re likely to have lost touch with your inner compass along the way.  In Tiffany-speak “inner compass” = your authentic self, your divinity, your soul.

However, although, and all at the same time… What happened, happened.  We are where we are.  And there is a perfection in that.  There is beauty in it somewhere. There is probably beauty in it everywhere. The great Amy Grant wrote “In the year of 1492 when Columbus sailed the ocean blue had he landed on India’s shore you might never have come to knock on my door.”  So, like, everything has been leading up to this perfect(ly imperfect) moment. I see now that the true source of my upset is not about what actually happened, but is connected to the deceptions that led to the delusions that keep us from genuinely knowing ourselves and each other.  Of course there is a racial component to this topic.  The things that happened then are still happening now in varying degrees. Patterns are repeated.  History is repeated.  We each have a responsibility to wake up out of those cycles.  To un-become who the world has taught us to be, so we can be who we really are.  This requires being able to discern the difference between what the world has taught us and what is true. 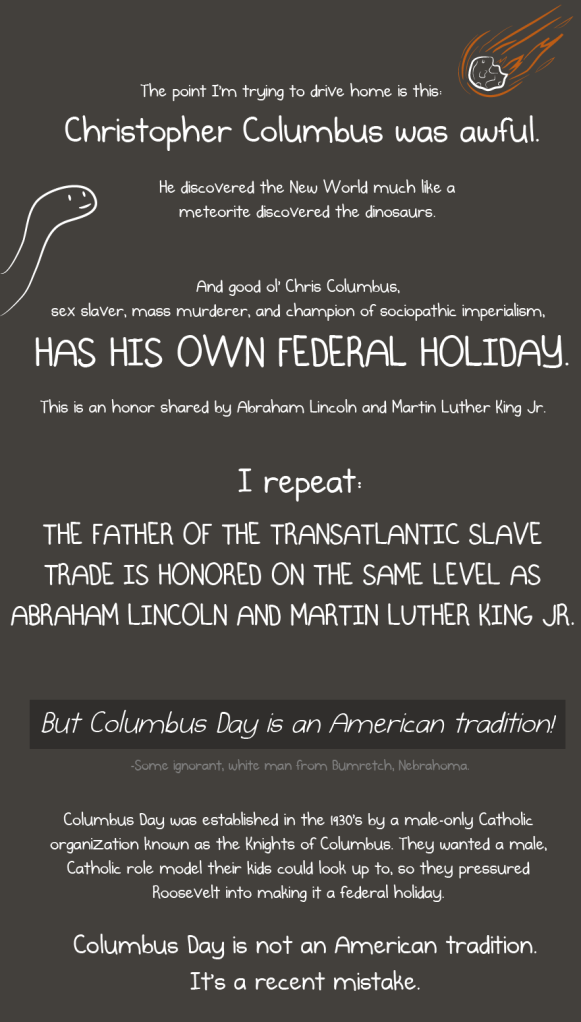 Click here for the rest of the comic which inspired Seattle to rename Columbus Day Indigenous People’s Day.  Yes, Seattle!  Hawaii, Alaska, Oregon, and South Dakota so not observe Columbus Day. Xo to them!

And from that time when I wasn’t blogging, but was saving all of these articles about things I would blog about when I started blogging again:

Finally, a Perfect Term for When White People “Discover” Things 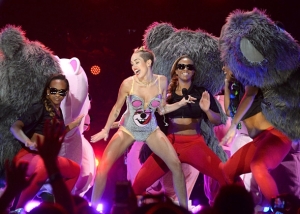 At some point in their adolescence, most people will come to learn that the oft-taught grade school tidbit that Christopher Columbus “discovered” the Americas is, at best, a significant stretching of the truth. They’ll also soon realize that Columbus’ claim to fame is only one example in a long historical pattern of white people taking credit for uncovering “new” things that actually existed long before they were aware of them.

And so it’s only logical that someone would put two and two together and finally coin the perfect term for this infuriating habit: “Columbusing.” The folks at College Humor have created a great video to help you understand the exact way to employ it—so the next time someone credits Miley Cyrus for twerking, you’ll be ready.