This is a sad story.  I’m not up on the politics of the United Kingdom, so I had to look up the BNP or British National Party.  Here’s what I found on Wikipedia: 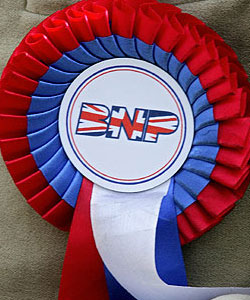 The British National Party (BNP) is a far-right and whites-only political party in the United Kingdom.

The BNP is not represented in Parliament.

According to its constitution, the BNP is “committed to stemming and reversing the tide of non-white immigration and to restoring, by legal changes, negotiation and consent the overwhelmingly white makeup of the British population that existed in Britain prior to 1948”. The BNP proposes “firm but voluntary incentives for immigrants and their descendants to return home”. The party also advocates the repeal of all anti-discrimination legislation, and restricts party membership to “indigenous British ethnic groups deriving from the class of ‘IndigenousCaucasian’”. The BNP also accepts white immigrants that are assimilated into one of those ethnicities. The BNP asserts that there are biological racial differences that determine the behaviour and character of individuals of different races, although it claims that it does not regard whites as superior to other ethnic groups, and that preference for one’s own ethnicity is a part of human nature. 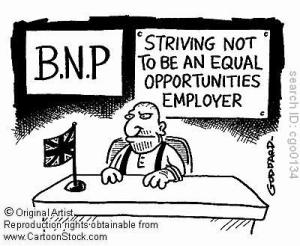 The victim, a 14-year-old mixed race girl, was repeatedly insulted with racist terms for six months by a 15-year-old, BNP supporting fellow pupil.

Last month the boy became the first school child to be convicted of racially aggravated harassment of a fellow pupil following a trial at Lincoln Youth Court.

The conviction prompted questions over whether such racist bullying should be dealt with through criminal law or by schools themselves.

The boy could have been detained for up to two years in a young offenders’ institution but he was instead sentenced to a six month supervision order and made to pay £500 compensation to the girl, which will be paid by his father.

The victim, who tried to kill herself with an overdose of stress pills and painkillers, said she was “disappointed” with the sentence.

She said: “When my mum told me the sentence I just thought ‘Is that it? That’s pants.’

“He has got a slap on the wrists and been told he was a naughty boy – that’s all. He has not paid the price for what he has put me through and he will never have to suffer like I have.

“I want him to be out into a multi-cultural school where he is one of the only white pupils to see what it feels like to be in the minority. I want him to be in my shoes and see how he copes with that.”

The girl, who is of mixed white English and black African heritage, was called “wog”, “coon”, “nigger”, “gorilla” and “golliwog” by the boy. She also suffered abusive chants of “white, white, white is right, kick them out, fight, fight, fight” and was repeatedly told: “Go back to your own country, you don’t belong here.”

She wrote a suicide note and took an overdose on Jan 25 this year. She was then sectioned for six weeks in a psychiatric hospital before the family moved to a different part of the country.

After the sentencing her mother said: “…He bullied her to the extent she actually wanted to die but he had no remorse. When he was found guilty we were on a high and thought we would finally get justice. But now we feel we have put ourselves out there and not got anything back.

During the case it emerged the boy was a known BNP supporter who actively tried to enlist other youths.

The victim’s mother said: “It’s very sad and comes from ignorance more than anything. My daughter is British, she was born in this country and has a British passport. But they just think everyone living in the UK should be white and English.”