Although I am reading two books similar to this right now, I am so eager to jump into this one.  My “mulatto” google alert alerted me to this review.  I found myself fascinated by the first two paragraphs…

The Family That Rejected Jim Crow

By Martha A. Sandweiss

W. Ralph Eubanks’s family memoir tells a double story, one about the past and the other about the author’s efforts to uncover it. This has become a familiar kind of literature, the search for family roots that becomes a search for one’s own identity. But Eubanks has an unusual story to tell. His maternal grandparents, Jim and Edna Richardson, lived on a remote rural road in a black community in the now deserted town of Prestwick, Ala. According to family stories, they married in 1914 and by 1929 had seven children. Jim was a white man, a “boisterous adventurer” and bootlegger who ran a logging business. Edna’s racial heritage was mixed, but she thought of herself as black. In Jim Crow Alabama, where the courts had repeatedly upheld the state constitution’s ban on interracial marriages, the Richardsons constituted an unusual sort of family, and they defied the social rules that governed the segregated South. After Edna died in 1937, Jim remained in Prestwick with his light-skinned children. They could have moved away to start life anew as a “white” family. After all, Eubanks says, the children were so fair that a federal census agent once categorized them as “white.” But the family “made a conscious choice to identify as black people, in spite of skin color and features that would have allowed them to move seamlessly into the white world.”

Eubanks sees this act as both radical and heroic. As a black man married to a white woman, he finds in his grandparents’ lives valuable lessons for his own. “Sometimes it even felt as if they had forged a path for the life my wife and I shared, occasionally guiding us on our way.” He thus crafts a progressive tale of social improvement, with his grandparents’ and parents’ lives in the Jim Crow South paving the way for his own youth during the civil rights era and eventually leading to his 11-year-old daughter’s vision of a world “where race matters less and justice and our common humanity matter more.” 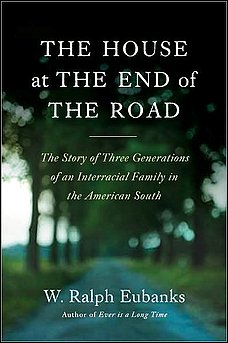