I’d love to see the show that this article details.  All whites are racist!?  I have a hard time buying that.  Prejudiced or biased, maybe.  I think all people are no matter the color.  Anyway, it upsets me greatly that the black father of the mixed-race girl doesn’t want to expose her “secret.”  Um…. how is she supposed to form a positive, all-encompassing identity if her black father is hiding from her white friends?  I wonder if this will be on BBC America.

TEACHER: ‘ALL WHITES ARE RACIST’

A Bombshell new television show will tonight claim that all white people are racist.

An American schoolteacher and anti-race campaigner will conduct an experiment for Channel 4 to prove how prejudiced Britain is.

Jane Elliott, 76, whose nickname is The Bitch, travelled to the UK for the test.

Part of the show features former Prime Minister Margaret Thatcher made up as a black person and US President Barack Obama as a Chinese.

Elliott is given a group of 30 volunteers, of mixed age and race, and splits them into two teams based on their eye colour.

Those with brown eyes are treated well, but those with blue eyes are ridiculed, humiliated and insulted.

Her aim is to create a mock “apartheid regime” to make the blue eyed people experience prejudice, discrimination and racism.

However at the end of the experiment, set in an old warehouse and lasting several hours, the white and black volunteers end up in a bitter row.

Some even walk out. Many of the white volunteers claim that black people do not have the monopoly on discrimination.

A middle aged white woman says: “They think racism is just for black people. I’ve had comments made about me because I’m blonde and white.”

However one dad, who is black, reveals how he never picks his daughter up from school because her mum is white and he doesn’t want anyone to know she is mixed race in case she is taunted.

At the end of the experiment, Elliott claims the white volunteers have shown their true colours.

She tells the C4 documentary tonight at 10pm: “White people should feel guilty about their behaviour.

“We are conditioned to the method of white superiority from the moment of birth.” 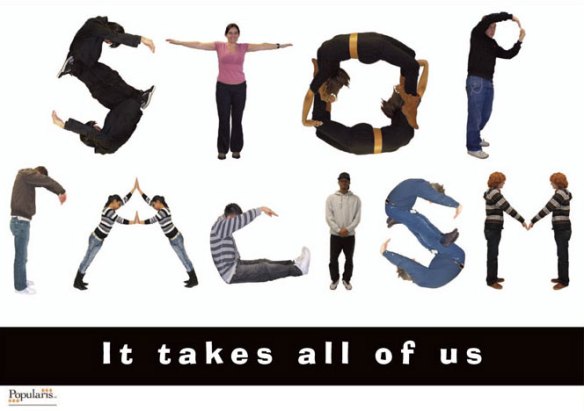