I think it’s possible to be bicultural, yet monolingual, and still experience an unconscious personality shift when moving between the two cultures.

People who are bicultural and speak two languages may actually shift their personalities when they switch from one language to another, according to new research in the Journal of Consumer Research.

The authors studied groups of Hispanic women, all of whom were bilingual, but with varying degrees of cultural identification. They found significant levels of “frame-shifting” (changes in self perception) in bicultural participants-those who participate in both Latino and Anglo culture. While frame-shifting has been studied before, the new research found that biculturals switched frames more quickly and easily than bilingual monoculturals.

The authors found that the women classified themselves as more assertive when they spoke Spanish than when they spoke English. They also had significantly different perceptions of women in ads when the ads were in Spanish versus English. “In the Spanish-language sessions, informants perceived females as more self-sufficient and extroverted,” write the authors.

In one of the studies, a group of bilingual U.S. Hispanic women viewed ads that featured women in different scenarios. The participants saw the ads in one language (English or Spanish) and then, six months later, they viewed the same ads in the other language. Their perceptions of themselves and the women in the ads shifted depending on the language. “One respondent, for example, saw an ad’s main character as a risk-taking, independent woman in the Spanish version of the ad, but as a hopeless, lonely, confused woman in the English version,” write the authors.

The shift in perception seems to happen unconsciously, and may have broad implications for consumer behavior and political choices among biculturals. 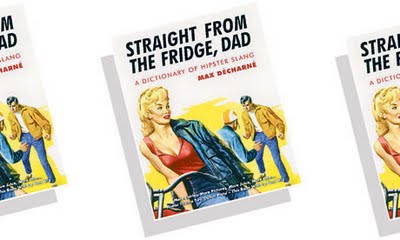 An informer (someone who drops a dime in payphone to call the cops).

FREE TO RUN FOR PRESIDENT

Out of work, unemployed.

HAEMOPHILIA OF THE LARYNX

HAVE ONE ON THE CITY

Be hip, aware, alert to the situation.

Party girl (deriving from a supposed natural ability to regularly fall over backwards).

Going to the gas chamber.

STRAIGHT FROM THE FRIDGE

TAKEN OFF THE PAYROLL

VOMIT ON THE TABLE

YOUR ROOF IS LEAKING

The third edition of Straight From The Fridge, Dad by Max Décharné is out now (No Exit Press)