I just finished watching Glory for the 5th time.  It might be my favorite movie.  This movie was actually the catalyst for my whole “biracial” revelatory aha moment.  While watching Glory for the 4th time, I realized that, seeing as this was the history of our country, it is a miracle that I (a black and white person) even exist.  Truly.  And then I realized that I didn’t really exist.  There was no recognition of the miracle.  Not even an internal, personal one.  I realized that the history depicted in the film was the truth and that I had fallen victim to it’s legacy and failed to know myself fully. 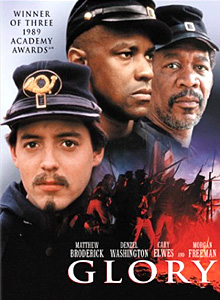 Watching the movie tonight, I was again blown away by Denzel Washington.  “The tear” is one of the most memorable moments I have witnessed on screen.  I also kept searching for the moment that might have triggered the big realization. My guess is the part where Matthew Broderick (as Robert Shaw) takes the 54th out with the other “negro regiment.”  The other leader is an ass to say the least.  He not only refers to the black soldiers as “little monkey children,” but he is extremely immoral in every sense of the word.  He treats his soldiers like animals, they act like animals.  Robert Shaw treats his soldiers with respect, like men.  In turn they are respectful and respectable men.

The most poignant moment for me this viewing though was when Broderick and Denzel Washington’s character (whose name escapes me), were discussing the predicament that was life in America at that time.  And arguably still is to a certain extent.  Denzel says “It stinks real bad.  And all of us are in it.  Ain’t no one clean.”  Broderick asks, “How do we get clean?”  There wasn’t a definitive answer, but if I had to glean one from the film it’s that we become clean when we decide to die fighting for what we now know to be right, no matter how many wrongs we may have committed in the past.

Thank you Edward Zwick, for the movie Glory.  I think it should be required viewing for every American.