ok, so, i like kid rock a little bit.  for three reasons: 1. he’s from detroit (well, Michigan anyway) 2. i think his song Amen is brilliant and beautiful 3. he has a biracial son (is that, like, racist of me…or some kind of positive prejudice…or just silly?) 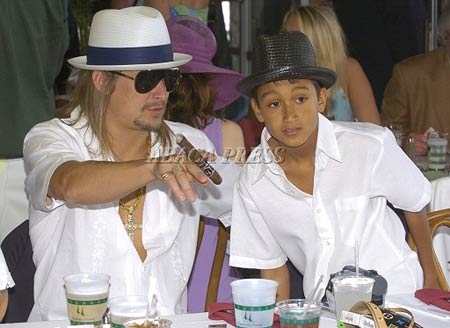 anywho, i do not like his use of the confederate flag.  to be fair, i don’t like anyone’s use of it.  especially if the user has a child of some significant color.  i understand that to some people the flag is simply a symbol of “southern pride.”  i really do believe that said people do not view the flag as a pro-slavery emblem… they don’t go around looking at black people wishing they were allowed to own them.  that’s too easy, too “obvious racist bad-guy.”  but, i think it is from a vantage point of either white privilege or ignorance (or both) that one can insistently be so insensitive as to say (or infer) “i know that this flag is hurtful to many, it reminds them of a time when they were considered less than human and were treated no better than cattle, it may make them feel unsafe…they may get the idea that i think back on those days as the good old days and wish we could revert back to them.”  i’m sorry, but the flag is just  not THAT cool, not worth all of that.  nothing is.  i would like to believe that it would be an easy “sacrifice” to put that flag away (as in not on your car, belt buckle, t-shirt…but whatever you want in your own home…) so as not to bring up all of that hateful, hurtful stuff to the people who are still negatively affected by the history of the flag, the implications of it.  how about a little more love, compassion, sensitivity… amen.

i mean, this is really not that much cooler than this….

not enough to warrant offending people to their core… even if it’s only 14 people, even one… especially if the one might be your kid, Kid.

Kid Rock’s NAACP Award Protested Over Use Of Confederate Flag

The rocker is set to accept the NAACP’s Detroit chapter’s Great Expectations Award at their annual Freedom Fund dinner in May, and some members of the historic black rights organization are so unhappy about it, they’re boycotting the 10,000 person affair.

It’s the singer’s use of the Confederate flag in his stage shows that has them so upset, according to the Detroit News.

“It’s a slap in the face for anyone who fought for civil rights in this country,” Adolph Mongo, head of Detroiters for Progress and a boycotting NAACP member told the paper last week. “It’s a symbol of hatred and bigotry.”

For his part, Rock defended the use of the flag in a 2008 interview with the Guardian. “Why should someone be able to own any image and say what it is?” he said. “Sure, it’s definitely got some scars, but I’ve never had an issue with it. To me it just represents pride in southern rock’n’roll music, plus it just looks cool.”

He also spoke about touring with a famed rapper and how it impacted his audience.

“I’ve got Rev Run [from Run DMC] on tour with me right now – we have fun trying to count the number of black people every night. We’re like, ‘There’s 14 tonight, yeah!'”

Though he was a staunch defender of President George W. Bush, the singer went to back for Barack Obama after his election, in the process defending America against accusations of racism.

“It’s good the U.S. has proved it’s not as racist as it’s sometimes portrayed,” he told Metro UK (via Spin Magazine).

He also spoke about his own experience growing up with black people in the interview, saying, “Black people were kind to me growing up and taught me hip-hop and the blues.”

For more on the NAACP controversy, click over to the Detroit News.