I don’t feel quite right about focusing more on Cheerios than on the Lovings yesterday.  Perhaps I did it because this is the 4th Loving Day that I’ve had this blog so felt that I’d covered that already. Or, perhaps I did it because I knew I had this one in store for today.  This article, written by the Rev. Jacqueline J. Lewis (Ph.D/black woman married to a white man/woman of color and of God who stands for equal rights for all re:gay marriage) for the Huffington Post Religion blog, is all about liberty and justice for all.  On a good day I’m all about liberty and justice for all!  That there’s a place called “Middle Church” makes my heart swell.  I want to go to there.  I love knowing that Reverend Lewis exists.  I find inspiration in that knowing.  I love knowing what Mildred Loving thought and how she felt about life and love and equality, and am inspired by that too.

P.S. I also love that Willy Wonka meme, yet I have no idea what Mr. Wonka has to do with this, if anything.  That was my own find on the world wide web, not part of the Reverend’s article. Just for the record.

P.P.S. It is nearly impossible to be depressed and inspired at the same time, so let us also encourage one another to be inspired.  Or, even better, start living an inspired life yourself and watch the inspiration and the health of your community grow.

Central Point, Virginia. 1958: Richard and Mildred Loving jailed. Their crime: marriage. He was white. She was black. “We were married on the second day of June. And the police came after us the fourteenth day of July,” Mildred Loving said in the documentary “The Loving Story” (HBO, 2011).

An anonymous tip sent police to their house in the middle of the night. Making love was a crime, too, for people of different races. The police found them sleeping. They were arrested for “cohabitating as man and wife, against the peace and dignity of the Commonwealth.” Their marriage was illegal in 24 states in 1958.

Richard and Mildred pled guilty, and received a one-year prison sentence, which would be suspended if they left Virginia. They moved to Washington, D.C., sneaking home to see family and friends. Mildred wrote a letter to U.S. Attorney General Robert F. Kennedy who referred her to the A.C.L.U. Richard told their lawyer, “Mr. Cohen, tell the court I love my wife, and it is just unfair that I can’t live with her in Virginia.”

Love was not enough to mitigate the racial fear and hatred that resisted their union. It was not enough to unravel the complicated narrative of white supremacy that led to segregation, to Jim Crow and anti-miscegenation laws.

In Loving v. Virginia, the U.S. Supreme Court’s unanimous decision held that the prohibition of biracial marriage was unconstitutional. Chief Justice Earl Warren and the other justices claimed that “Marriage is one of the ‘basic civil rights of man,’ fundamental to our very existence and survival … Under our constitution, the freedom to marry, or not marry a person of another race resides with the individual and cannot be infringed by the State.”

The Supreme Court changed the narrative, changed the story. And it changed the culture. According to Pew Research study of married couples (February 2012), the share of interracial couples reached an all-time high of 8.4 percent. In 1980, that share was just 3.2 percent.

The narrative of homophobia in our nation is also complicated and tragic. The culture has shaped it, religious institutions have often reinforced it, and fear feeds it. I believe that no matter what the culture asserts, adults have the civil right to marry, no matter their sexual orientation. 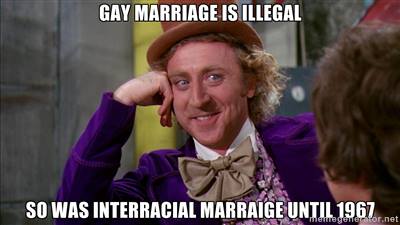 And I believe this is also true: Wherever love is, God is. The writer of 1 John says, “God is love. When we take up permanent residence in a life of love, we live in God and God lives in us.” I think it is important for congregations that teach “God is love” to also affirm the marriage of same-gender loving couples. They should have the civil right to marry and their love should be blessed in our churches.

On Sunday, June 9 at 6 p.m., at Middle Church, my white husband and I will celebrate Loving Day (celebrated nationally on June 12) and the landmark case that gave us the right to marry and live with each other. We will celebrate in hope that the Supreme Court will once again change the story, that it will rule on Prop 8 and DOMA in such a way that all couples have the right to marry in every state in our union.

Original gospel music by Broadway and television actor Tituss Burgess will be performed and there will be a renewal of vows for straight and gay couples. Burgess (Jersey Boys, The Little Mermaid, Guys and Dolls and 30 Rock), Alyson Palmer (of BETTY, whose music has been heard on The L-Word, Ugly Betty and Weeds), and Broadway’s Jenny Powers (Grease and Little Women) will solo at the event. Middle Church stands for the freedom of all couples to legally marry. During the commitment ceremony, all couples — no matter their ethnicity, or their gender or sexuality — can renew or make new vows to each other. We will celebrate loving, because we know for sure that love heals. Come and bring someone special with you!

Commenting on the similarities between interracial and same-sex marriage in 2007, Mildred Loving said, 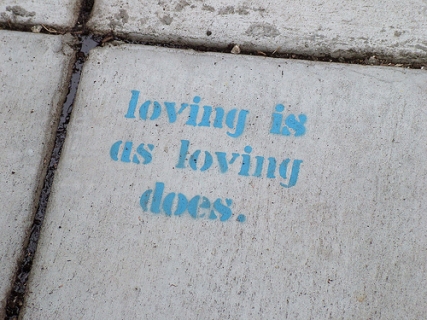