But especially not #6.  That is important.

Not awkward, and I only “don’t look like them” if you’re only looking at color.

Then it wouldn’t matter that I don’t fit into one, but I look like I do, but I don’t meet the expectations set by the color, I mean, assumption.  It would be irrelevant that I don’t get counted on my terms, am rarely acknowledged or seen in the way I perceive myself. Which is kind of raceless.  But kind of not because, clearly, I’m so not raceless.  I’m race-ful. Biracial is two races.  Multi-racial is however many more than that. And that shouldn’t be difficult, but it is, so I’d like to get rid of the whole thing.  If two is nearly impossible (and not really allowed if one of them is “black”), then one race can’t be very healthy either.

Oh! Wait!  We can’t forget that everyone is multiracial in some real, dna-tested kinda sense.  So basically everyone is “mixed” therefore everyone is not allowed to be who they really are.  And the system is set up so that we are unconscious to this because it’s “normal” and so we believe in the status quo and we don’t even want to know the truths underneath all of these restrictions that we accept as natural and allow to heavily influence our lives.

Switching to a lower gear… It’s also worth mentioning that any early existential crisis(es) shaped me into the person I am, and that person is pretty cool, so I’m at peace with the challenges I faced.  As futile and unnecessary as I believe them to have been.  That is why  I am not at peace with things staying the same, or thinking staying small, or identities and lives being wrapped up in artificial boxes that must be checked to maintain the political, economical and social status quo.  The status quo needs to go.  That just came out  rhyming like that, sorry.  It’s just that there’s so much time and energy being wasted in the world on the wrong things.  In my humble and guilty opinion.  I still waste and misplace all kinds of energy.

19 Signs You Are Multiracial

1. People speak to you in various foreign languages you do not understand.

2. Growing up you experienced premature existential crises over not fitting in to one specific ethnic marker. 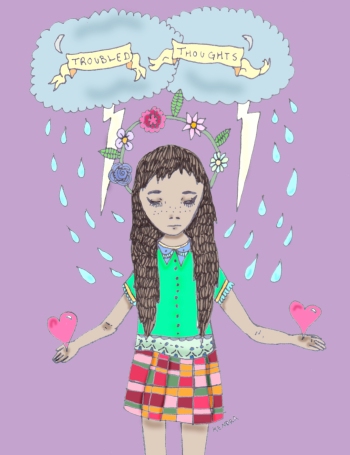 3. People often ask, “WHAT ARE YOU?”  in tones which make you feel subhuman or extraterrestrial.

4. You hesitate before filling out the “ethnic background” section of tests/ questionnaires.

5. You feel mild guilt over not identifying with one of your cultures (i.e. you hate the food).

6. You feel awkward during get-togethers with one side of the family because you look nothing like your other family members.

7. Men (or women) use your questionable ethnicity as a means to hit on you.

8. You’ve been examined like you are some rare, exotic creature.

9. You can’t understand your grandparents’ language.

10. There is an undeniable clashing of cultures whenever the two sides of your family meet.

11. Your grandparents initially disapproved of your parents’ union.

12. Similar to a “gay-dar,” you’ve developed a “multiracial-radar.”

13. You were totally eating fusion cuisine way before Kogi came into existence.

14. Playing “guess my ethnicity” is a legitimate game.

15. You’ve lied about your ethnicity in the past just for the hell of it, or to avoid conversation.

16. Your last name doesn’t really look like it belongs to you.

18. People you meet over the phone are surprised when they meet you in person.

19. You identify as a person of color, you just don’t know which.