I wasn’t familiar with the Stono Rebellion before yesterday.  Nat Turner, yes.  Stono, no.  So I “looked” it up.  Here’s what BlackPast.org had to offer…

On Sunday, September 9th, 1739 the British colony of South Carolina was shaken by a slave uprising that culminated with the death of sixty people. Led by an Angolan named Jemmy, a band of twenty slaves organized a rebellion on the banks of the Stono River. After breaking into Hutchinson’s store the band, now armed with guns, called for their liberty.  As they marched, overseers were killed and reluctant slaves were forced to join the company. The band reached the Edisto River where white colonists descended upon them, killing most of the rebels.  The survivors were sold off to the West Indies.

The immediate factors that sparked the uprising remain in doubt. A malaria epidemic in Charlestown, which caused general confusion throughout Carolina, may have influenced the timing of the Rebellion.  The recent (August 1739) passage of the Security Act by the South Carolina Colonial Assembly may also have played a role. The act required all white men to carry firearms to church on Sunday. Thus the enslaved leaders of the rebellion knew their best chance for success would be during the time of the church services when armed white males were away from the plantations.

After the Stono Rebellion South Carolina authorities moved to reduce provocations for rebellion.  Masters, for example, were penalized for imposing excessive work or brutal punishments of slaves and a school was started so that slaves could learn Christian doctrine.  In a colony that already had more blacks than whites, the Assembly also imposed a prohibitive duty on the importation of new slaves from Africa and the West Indies.  Authorities also tightened control over the enslaved.  The Assembly enacted a new law requiring a ratio of one white for every ten blacks on any plantation and passed the Negro Act of 1740 which prohibited enslaved people from growing their own food, assembling in groups, earning money they, rather than their owners, could retain or learning to read.

I read a few more accounts of the Rebellion.  While most of the websites relayed the story in identical fashion, I was slightly disturbed by this one that I found on teachingushistory.org.  I think this 4th grade textbook account is clearly biased in favor of the “white families.”  It’s almost subtle, but not really.  No other recounting mentioned drunk (on stolen goods) slaves, nor started the tale with “while the white families were in church.”   I can imagine my 4th grade self wanting to disappear during this lesson… 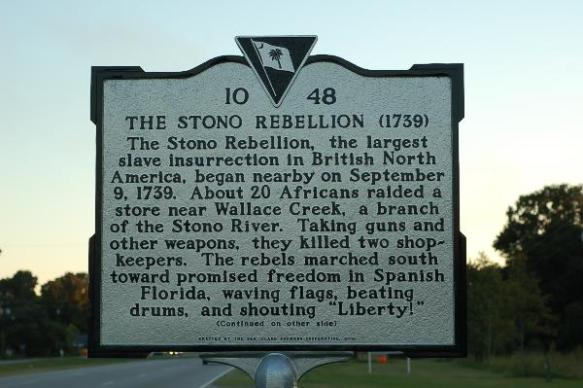 The Stono Rebellion occurred during the early morning hours of Sunday, September 9, 1739.  While white families were in church, a slave called Jemmy led a group of about 20 slaves who broke into a store, killed the store owner, and armed themselves with a supply of guns and ammunition.  From there the slaves moved southward from one plantation to another slaughtering whites and burning houses as they went.  Men, women, and children were killed.  Some were beheaded and their heads were left for display.  At one tavern, the insurgents spared the life of the innkeeper because he was known to be good to his slaves. At another, a slave hid his master and distracted the insurgents. (Smith 18)  As the slaves moved southward more slaves from the plantations joined the rebel force, which continued in military fashion displaying a flag and beating a drum.

Lt. Gov. William Bull, who was traveling on horseback with four companions, happened upon the rebels about eleven o’clock in the morning.  Bull and his companions quickly fled for their own safety.  They alerted the militia and local planters, who then organized men to pursue the insurgents. At about four o’clock in the afternoon they came upon the group of slaves about ten miles to the south.  Some slaves were resting.  Others were drunk on whiskey they had stolen in the raid.  The slaves fought hard, but the militia won the fight and ended the Stono Rebellion killing many of the slaves.  Slaves who escaped the scene were tracked down for months, and most were apprehended.   Those responsible for the revolt were executed.  One slave, July, who had saved the lives of his owner and the owner’s family was given his freedom.  Forty-four blacks and twenty-one whites lost their lives as a result of the Stono Rebellion.