Mariah Carey: in a frank interview, the singer tells all

…Carey’s own parents divorced when she was little, and although her father materialised occasionally to take her on trips – hiking or to the races – she didn’t get to know him properly until she was an adult… He was tough. He’d been in the military. I do miss him. At the end of his life we spent a lot of time together. And I learned a lot about his side of the family.”

Her mother grew up in the midwest. “She came from – er –?” Carey frowns. “Middle of America?” She brightens –”Illinois!” – and as such, she says wryly, “is among the whitest people I know”. Her father was half-African American, half-Venezuelan. “I’m a black woman who is very light skinned.” As a child, she was self-conscious of her mixed race, and it is still enough of an issue, in the US and elsewhere, that Carey is routinely accused of “trying too hard” in one racial direction or another.

“White people have a difficult time with [mixed race]. It’s like, my mother’s white – she’s so Irish, she loves Ireland, she’s like, yay, Ireland! Waving the flag and singing When Irish Eyes Are Smiling. And that’s great. I appreciate that and respect it. But there’s a whole other side of me that makes me who I am and makes people uncomfortable. My father identified as a black man. No one asked him because he was clearly black. But people always ask me. If we were together, people would look at us in a really strange way. It sucked. As a little girl I had blond hair and they’d look at me, look at him, and be disgusted.”

She says she “needs to talk” to Obama about this. When he became president, she was overwhelmed and delighted, “but for years we never believed it would happen. There’s a group who will never get it, never want to get it. Because you have to lose the purity of both races and there are certain people who really don’t want that to happen. I think it starts with people teaching their children that it’s not OK, because they don’t want their kid to come home with someone of another race. I understand people want to hold on to their roots. But for me, I was a complete nonentity because of it. Maybe that was part of my drive to succeed. I’ll become accepted.” 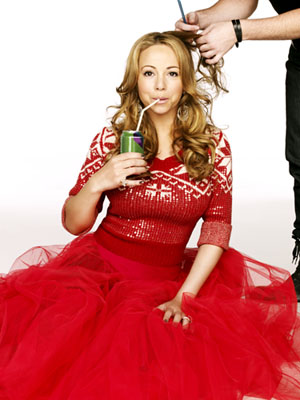