“I’m a North London, working-class, black, Jewish girl,” actress Sophie Okonedo said. “I love my upbringing because it had so many different colors; it’s given me the equipment to play lots of diverse roles.”

In 2005, the tall, striking actress burst into the international spotlight when she was nominated for an Oscar for her harrowing turn as the wife of a hotel manager who hid more than 1,200 refugees from genocidal militias in “Hotel Rwanda.” As the unexpected new toast of Hollywood — Newsweek described her performance as a “revelation” — she went on to portray an emotionally disturbed young woman in civil rights-era South Carolina in “The Secret Life of Bees.”

Now she has tackled her first leading role in “Skin,” based on the true story of Sandra Laing, a biracial girl born to white parents — unaware of a black ancestor in their family tree — in 1950s South Africa. The film chronicles the parents’ battle for Sandra to be classified as “white,” her rebellion and marriage to a black man and subsequent struggle to be reclassified as “colored” to keep her children. At one point in the film, Laing’s parents learn the 10-year-old Sandra cannot continue to live in their home unless she is documented as a household servant. 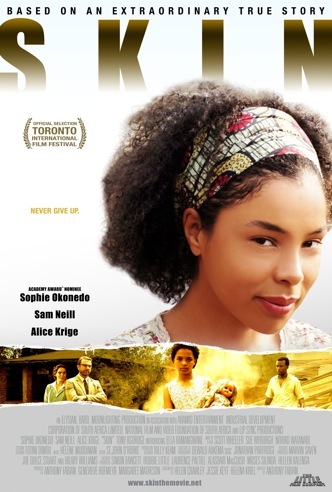 The script stunned Okonedo when it arrived at her North London home not long after her Oscar nomination. “The story was so extraordinary I almost couldn’t believe it was true,” she said from the flat she shares with her 12-year-old daughter.

And then there was the personal connection for Okonedo, 40, who was raised by her Ashkenazi mother and Yiddish-speaking grandparents after her father, a Nigerian civil servant, abandoned the family when Sophie was 5.

“I could relate to being black and brought up in a white family,” she said. “Of course being raised in North London in the 1970s was much kinder than South Africa in the ’50s. But it was helpful to understand what it is like to have a family that is a different color than you — and to question your heritage when people say, ‘That can’t possibly be your mum.’”

…Okonedo was the only black congregant at the liberal synagogue she attended with her grandparents, although she refuses to discuss previous remarks she reportedly made about encountering discrimination from both blacks and Jews.

…“My grandparents kept a fairly Jewish household,” Okonedo said. “They celebrated all the holidays, and they spoke Yiddish when they didn’t want me to understand the conversation. I feel sad I didn’t learn Yiddish as a child,” she added. “It’s such a fantastic language, so expressive. And now my grandparents are too old to teach me.”

Now that her grandparents are in their 90s, the family holiday celebrations have ceased. “But culturally I’m still very Jewish,” Okonedo said. “It’s all in my blood.”

Over the years, her mother has remained Okonedo’s staunchest champion — encouraging her to attend the Royal Academy of Dramatic Art after she dropped out of school at 16, and later traveling with her to theater and movie sets to attend to her hair. “I’m not very good at the whole dressing-up thing,” Okonedo said.