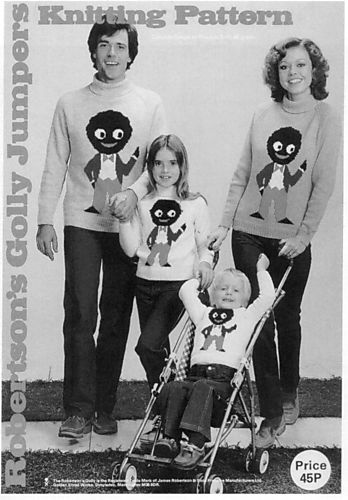 At first I was just going to post this photo as something I don’t like.  Why on earth are these white people wearing sambo on their sweaters?  Homemade sweaters at that!  Then I figured I should look into this.  Oh boy!  This is Golly.  You could buy this pattern today on ebay.  Golly began as golliwogg in Florence Kate Upton’s 1895 book “The Adventures of Two Dutch Dolls and a Golliwogg.” Upton, a native New Yorker, first describes him as “a horrid sight, the blackest gnome.”  He was a caricature of American black faced minstrels – in effect, the caricature of a caricature. The book became very popular in England and thirteen books featuring Golliwogg were published.  Then they began making rag dolls. During the first half of the twentieth century, the Golliwog doll was a favourite children’s soft toy in Europe. Only the Teddy Bear exceeded the Golliwog in popularity. 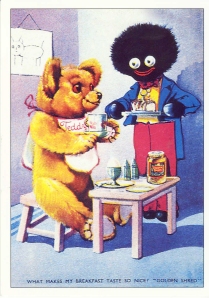 Small children slept with their black dolls. Many White Europeans still speak with nostalgic sentiment about their childhood gollies. Now onto Robertson’s. The Golliwog is inextricably linked with the famous English preserves company, James Robertson & Sons. Robertson’s Jams has been using the smiling Golliwog as its logo since the 1920s until it was discontinued in 2001. Despite much criticism during the 1960s and ’70s, they simply changed their logo’s name to ‘Golly’, and continued to stand by their trusty mascot. Consequently, the collecting of Robertson’s Golly memorabilia is a hobby in itself, with a vast array of promotional material and items to be collected.